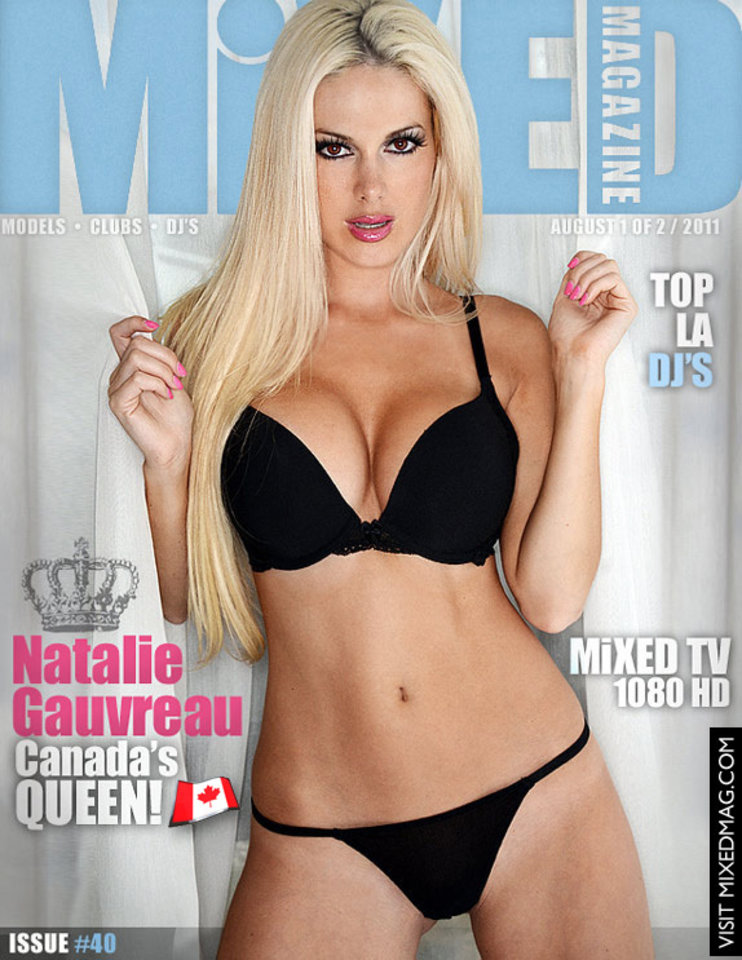 Canada’s Queen – Natalie Gauvreau! If only every girl could be like Natalie life would be just grand. This experienced French Canadian model scores with flying colors in every category imaginable. From her car(2011 Maserati), face, body, sexy appeal, personality, professionalism, etc. etc. Natalie is truly the complete package! After many years of looking for the most perfect Canadian model it was clear instantly by looking at merely 1 cell phone picture she had posted on her twitter @sexynatg, that Mixed Magazine had to book the first plane cooking to beautiful Toronto, Canada. While watching all the disgruntled people in the airports going through customs looking unhappy and complaining this yours truly photographer had a smile on his face as he knew he was embarking on photographing a masterpiece in the midst. At last it was true that @SexyNatG did exist when she pulled up in her 2011 Maserati Gran Turismo S. She even states, “You can call me what you want, but you can’t call me poor”. She admits her two favorite things in the world are rich men and massages. This women really knows how to get what she wants because everyday she is living in her dreams. She travels on a regular basis, eats the finest foods, drives the nicest cars and respects everyone around her. She is direct and to the point and wastes no time with any of life shenanigans. These may very well be the traits needed to be successful. I have to say that after having 7 photo shoot no-shows in a row with filler models with the worst excuses ever that this was a great way to celebrate the fact the awesome girls still exist and Mixed Magazine will always move forward in showcasing them right here just for you. When looking at Natalie Gauvreau just realize one thing, you are very lucky and blessed to be witnessing such beauty! Take it to the next level also by joining our Exclusive Member Section where you can see all the sexy photos and videos of Natalie

An interview with Natalie Gauvreau:

Where were you born, and how was life growing up? I grew up in Canada and I have no complaints.

What nationality are you? French Canadian

Do you go to college? Yes for real-estate

Did you pass the real estate exam on the first try? YES, of course!

What would the average person say about you? That I know what I want and know how to get it.

Are you a good dancer? yes

Do you like the nerdy type, UFC fighter guy or the regular joe? CEO’S

What’s your biggest turn on? massages, they get me everytime

What’s one thing about yourself that everyone should know? I don’t really like to go to clubs and love just being with my boyfriend and enjoying quality time.

What do guys compliment you most on? A little of everything.

Do you consider yourself more of a “giver” or a “taker”? Taker, duh..

If you could have any car you wanted, what would it be? The car I’m driving. Maserati Gran Turismo S

What do you like best about being a model? Being in front of the camera

What would you consider your strongest attribute? Determination.

What do you normally sleep in? Booty shorts and a tank top.

If you could go anywhere in the world, where would you go and who would you take with you? Fiji and I would go with my uncover lover.

Do you have any shocking stories from modeling? Yes, I was recently in London doing a photo shoot at the Ritz Carlton when a extremely intimidating hotel officer gave us the third degree and forbidded us to continue our shoot. Turns out they had even kicked out Madonna and many other famous people from doing photo shoots there in the past. Needless to say there was no Puttin’ on the Ritz that day.

What is your favorite food? Italian

What do you do for fun? Shop

What are your dreams and goals? To be a trophy wife.

How does someone contact you for a modeling project? www.sexynatg.com

Some of Natalie’s modeling work:

| Back to main page

You can login here.

Mixed magazine contains sexually explicit material and therefore must only be access if you're over 18 years of age.