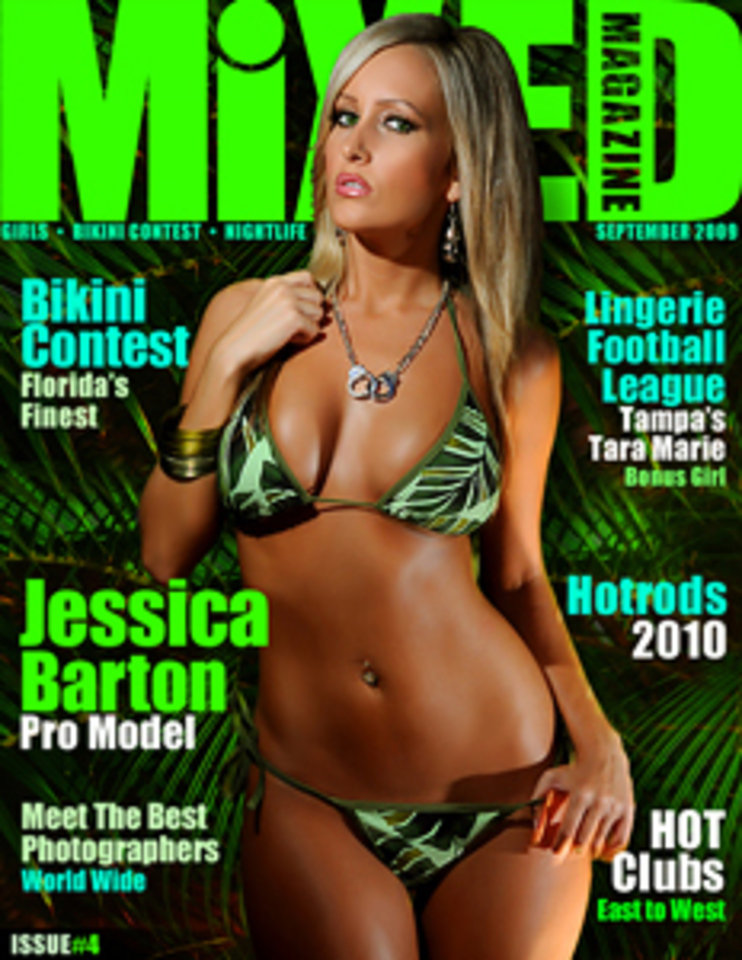 For several years Jessica Barton has graced the covers of tons of magazines, car shows, bikini contest and television and now comes to Mixed Magazine to shed her beauty by wearing some of the hottest bikinis scenes every shot wearing the sexiest swimwear and accessories by FlirtCatalog.com! Jessica Barton grew up in sunny Cocoa Beach, Florida, home to 9-time world champion professional surfer Kelly Slater amongst many other famous individuals. She started as an akward teenager who never thought she would model until she was approached by a few photographers who had an eye for greatness. She now is one of the most elite bikini models in the world. Widely known in the automotive industry for working as a television host and tradeshow model and for having one of the fastest cars on the streets. Her modeling career has enabled her to purchase and develop a super Supra complete with all the bells and whistles. With her take charge personality, she is always determined to win on and off the track. Learn more of Jessica Barton below and make sure to join the Member Section to see some of the steamiest pictures ever!

An Interview with Jessica Barton:

Where did you grow up? I grew up in Cocoa Beach Florida. You know, your average goth girl in the surfer town

How’d you get into modeling? I started off doing makeup for a few photographers here and there and they would occasionally shoot me. My pics started making the rounds on some photography forums and before you knew it a ton of the Florida photog’s wanted  to shoot me!

What kind of car do you drive? Well for every day I drive a nice big truck. Its a 2007 Toyota Tundra. I got it to tow my race car! I have a 1200hp 1994 toyota Supra that I drag race. I’ve been the fastest of 9.13 in the quarter mile at 160mph! I can also drive her on the streets, which I do from time to time out here in Orlando.

So what have you learned NOT to do since you’ve been in the biz? I’ve learned not to be late and not to ever cancel. So many girls show up late or don’t show up at all and they miss tons of opportunities and get bad reps. Im so early to jobs that most of my clients have to tel me to, just be on time, not early, just on time Jess.

Where do you want to go with your modeling? I definently love modeling but as a glamour model there is only so far you can go. I’ve done FHM, American Curves, Playboy, all the car mags, everything. Luckily I have worked hard and trained to be a host. I have worked for ESPN2, INHD, FOX Sports as well as many regional and online channels hosting for various things, such as, NHRA and Nascar. Id love to get more involved in hosting and even dip a little more into acting since I had a great experience in my lead role in “Zombies Zombies Zombies”.

Where do you see yourself in 10 years? Hopefully either hosting NHrA Full Throttle racing series on ESPN2 or racing as a pro in the series!
What country do you want to visit the most? Greece! I want to visit there sooo bad. It looks amazing and the few people I know that have been there says it is an awsome place to travel to.
Who is your favorite photographer? Well you Dan of course

I definently think we have a talented crop of photographers here in Florida. Right now Chris Knight and Nick Suarez are great for being able to shoot any and all styles.

Would you ever pose for Playboy? Of course. Been there, done that..haha. I did some playboy stuff when I first started modeling and even helped my friend Kara Monaco get started with them and she became PMOY.

Do you have a website? Yes. Its not completed yet but check out www.jessicabarton.comor www.thebartontwins.com

Would you ever spice things up by dancing for your man? I have actually done that before. I am not the best dancer but needless to say the dancing didn’t last very long anyways! If you check out “zombies Zombies Zombies” you can see the sweet lapdance I give my love interest in the movie. Its well worth it!
Do you have a favorite photoshoot location that you would like to revisit? Hell yeah I do! Tahiti and Bora Bora. I was the for 3 1/2 weeks shooting for Bikini Destinations and it was rediculously amazing! Gorgeous views, locations, water, it was endless gorgeous shooting opportunities. Everywhere you walked was set up to shoot.

What’s the wildest thing you’ve ever done? I can’t say I’ve ever done anything too wild. I have a great time with friends at strip clubs, but I think everyone gets a little wild in those places. Wild in another sense would be some of the things I did when I was younger, like wuite a bit of street racing. My car is toofast and unpredictable for me now to do anything crazy like that. Plus, you grow up and see how stupid it was. I love seeing all these older men still trying to prove something on the street when they can’t even get their cars down the track. Its such a joke!

So, do looks mean a lot to you when you’re looking at the opposite sex? nope. I never look at a guy and instantly think they are hot. They have to grow on me. I’ve always dated friends, who I knew well and who I really greaw to like. My relationships have worked out a lot better because of that and I’ve been able to stay friends with them in the end that way.

What type of man do you like? I like smart guys. They have to be more intelligent than me to keep me on my toes and because I like to learn from my man not teach him. I have to be able to talk to him and we have to have similar interests. I mean if I know more about cars than a guy then I find it totally unattractive!

Are you the romantic laid back type or are you a wild child? I am totally laid back but It only takes a few shots for me to turn into the wild child though.

What kind of music do you listen to? I actually listen to a lot of country right now but my musical interests are always changing.

What makes you the most happy? I love traveling and working a lot. I feel my best when I am super slammed with tons of things to do. I need to be occupied or I feel kind of worthless.

What do you do for fun when you’re not modeling? all car stuff! Actually I sounds like a guy. Drag racing, hanging at the shop, bowling and playing pool are some of the fun things I do.

What is one thing interesting thing about you that people don’t know? That I used to be 100% gothic! I was a total freak in highschool. I had a blast though and wouldn’t change it for anything. I mean I probably would have never worn or learned anything about makeup without going though that phase.

Thank you and much success in the future!

| Back to main page

You can login here.

Mixed magazine contains sexually explicit material and therefore must only be access if you're over 18 years of age.